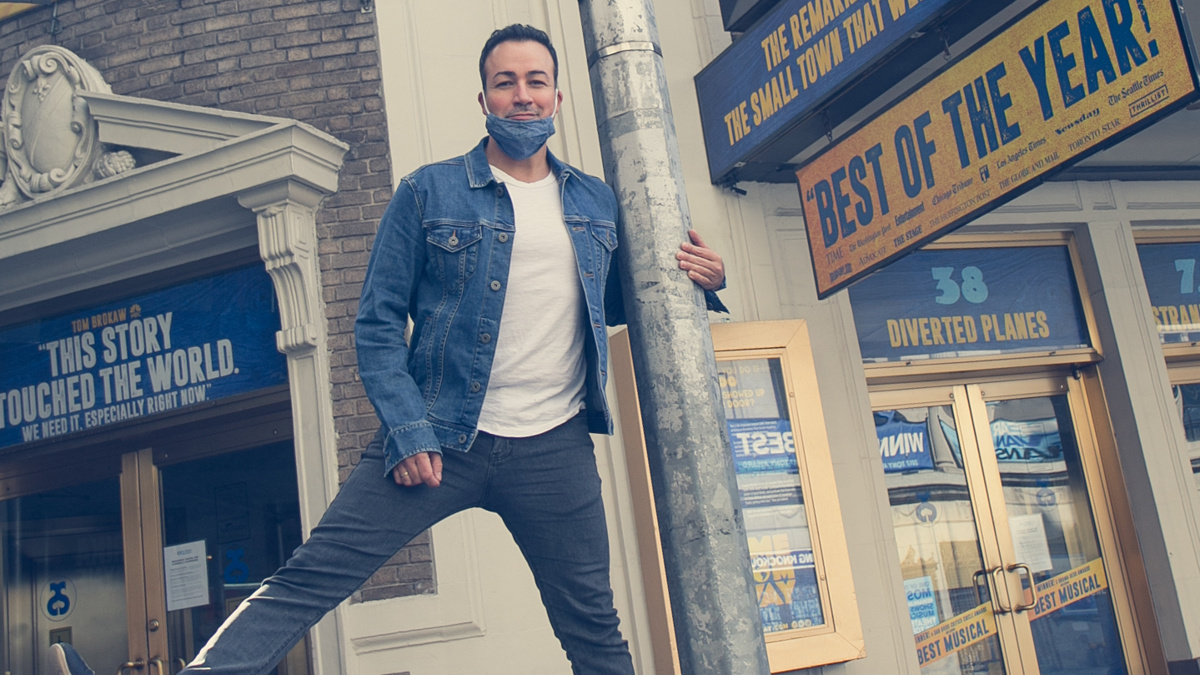 Living near the theater district during the Broadway shutdown, photographer and performer Matthew Stocke has been haunted walking past the empty palaces sitting in repose, waiting for the lights and stars to return. In this new Broadway.com photo feature, he reunites members of the theater community with their Broadway home #AwayFromHome.

CAESAR SAMAYOA
COME FROM AWAY

On March 12, Caesar Samayoa and the Come From Away company had intended to celebrate the show’s three-year Broadway anniversary. Instead, Samayoa received a text message on his way to physical therapy saying the show was shutting down due to the coronavirus crisis. Having been involved with Come From Away since its development, Samayoa—like his fellow longtime cast members and super fans who have seen the show again and again—finds the hit musical to be a spiritual salve. Here, the performer examines how the musical about a small town welcoming stranded travelers in the aftermath of 9/11 relates to the present.

“In hindsight, it’s just crazy thinking about the week and a half before the shutdown. It started happening in ways we didn’t even realize at the time: one day, there’s hand sanitizer in the theater. The next day, no more backstage guests. Next day: the dressing rooms and other spaces are going to be disinfected before and after every single show. There were going to be no more stage door lines, which in our show is not really about the autographs. We have conversations with first responders, with survivors, with people who have lost family on 9/11—that happens every day at our show. In some ways, that is even more important than the story we are telling onstage….Everything that we’ve been able to do because of Come From Away has been a gift. In not being able to do it every night, I have realized what a gift it has been. There’s just a beautiful energy around the show. In this crazy, tumultuous time in our country, I got to go to work and tell a story about human kindness that viscerally affects people. It delivers the exact message that we are all desperate for right now. It is not a huge feat that is celebrated, it’s these small acts of kindness that have a domino effect. I think we’ve realized that lives can be changed by something as simple as opening a door for somebody….My family’s from Guatemala. We just weren’t surrounded by the arts in a big way. When we moved to the United States, my fourth grade teacher brought us to see Peter Pan. I remember seeing the gentleman playing Captain Hook and being like, ‘How do you become something like this?’ I’ve always had that dream of being a part of the Broadway community, and actually, being a part of the community is even better than being on Broadway. Theater artists are doing what they can, how they can right now. When you strain a creative person is when the real creativity bursts through. I think we’re just at the beginning of it. I don’t think Broadway’s ready for what’s to come when it reopens. I have this dream that when we all get on that stage and hear the first beat of the drum, we’ll applaud the audience. Because we wouldn’t be there without them.”