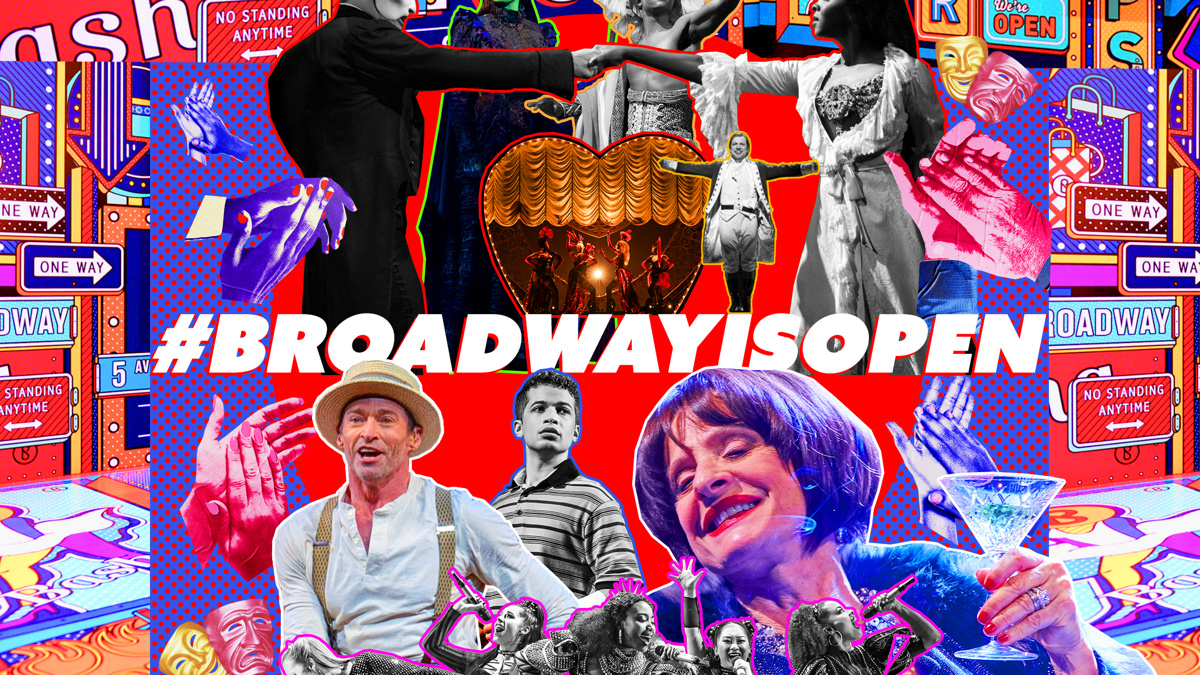 Curtain Up! Here’s What You Can See on Broadway Right Now

Broadway is open! Here’s what you can see right now.

Ain’t Too Proud
The story of the The Temptations is back at Imperial Theatre with Tony-winning choreography and songs you know and love. Be sure to catch the musical before its final performance on January 16. See it!

Aladdin
Go on a high-flying magic carpet ride with this story brought to thrilling life at the New Amsterdam Theatre. Before you head to the theater, step inside the first day of rehearsal with stars Michael Maliakel, Shoba Narayan, Michael James Scott. See it!

American Utopia
David Byrne‘s gray-suited troupe of musicians perform hits from his career at the St. James Theatre. Hear the former Talking Heads frontma talk about the theatrical concert below. See it!

Clyde’s
A stirring new play from two-time Pulitzer Prize-winning playwright Lynn Nottage. Watch the play’s star Uzo Aduba talk about returning to her stage roots below. Catch the limited engagement live before it ends on January 16. See it!

Come From Away
Find out the remarkable true story of a small town that welcomed the world on September 11, 2001. Olivier nominee Rachel Tucker leads the cast of this heartwarming musical. See it!

Company
This fresh revival of the Stephen Sondheim and George Futh musical stars Katrina Lenk and Patti LuPone at the Jacobs Theatre. Check out the confetti-filled opening night before catching this umissable show live. See it!

Dear Evan Hansen
Stage and screen star Jordan Fisher leads the Tony-winning hit about an anxious high schooler caught at the center of a story that spirals out of control. Hear what Fisher has to say about tackling the role below. See it!

Flying Over Sunset
The new musical is inspired by the lives of three extraordinary people who experimented with LSD. Watch the musical’s creators James Lapine, Tom Kitt and Michael Korie discuss the production below, and then see the show live before it ends on January 16. See it!

Girl From the North Country
Conor McPherson’s new work, featuring the music of Bob Dylan, returns to the Belasco Theatre. Get to know the cast and characters through these portraits. See it!

Hadestown
The Tony-winning musical tale of lovers and dreamers from Greek mythology sings out at the Walter Kerr Theatre. Hear the musical’s stars Eva Noblezada and Reeve Carney talk about playing star-crossed lovers below. See it!

Hamilton
The revolutionary Broadway blockbuster by Lin-Manuel Miranda returns to the Richard Rodgers Theatre. Watch as the cast, led by Miguel Cervantes as Alexander Hamilton and Jin Ha as Aaron Burr, takes their reopening night bows. See it!

Harry Potter and the Cursed Child
Originally produced as a two-part play, Jack Thorne and John Tiffany’s continuation of J.K. Rowling’s magical universe has been restaged as one singular performance by the award-winning creative team. See it!

MJ The Musical
Newcomer Myles Frost takes on the leading role in this new musical about Michael Jackson, featuring songs from the legend’s career. See it!

Moulin Rouge! The Musical
Experience the thrill of this spectacular new musical based on Baz Luhrmann’s 2001 film featuring pop hits from the past 50 years. Get to know the Tony-winning choreographer Sonya Tayeh and the all-star ensemble below. See it!

Six
Watch six ex-wives of King Henry VIII in an electrifying history remix at the Brooks Atkinson Theatre. Sit down with Brittney Mack as she reveals the “secret sauce” of the popular musical below. See it!

Skeleton Crew
Tony winner Phylicia Rashad returns to Broadway in Dominique Morisseau’s play set in Detroit in 2008. It follows a small automotive factory on the brink of foreclosure and the tight-knit family of workers hangs in the balance. See it!

Slave Play
Jeremy O. Harris’ acclaimed play that rips open history at the intersection of race, love, sex and sexuality in 21st-century America. Check out photos from the play’s reopening night. See it!

The Book of Mormon
The hilarious nine-time Tony-winning musical follows two young missionaries who are sent to Uganda to try to convert citizens to the Mormon religion. See it!

The Lion King
Pride Rock comes to life in Disney’s long-running hit at the Minskoff Theatre. Brandon A. McCall, who starred in the national touring production, makes his Broadway debut as Simba. See it!

The Music Man
This revival, starring Tony winners Hugh Jackman and Sutton Foster, marches with 76 trombones into the Winter Garden Theatre. Watch Jackman and Foster perform “Shipoopi” from the show’s first performance below. See it!

The Phantom of the Opera
Broadway’s longest-running musical is back into its home at the Majestic Theatre and welcoming audiences to the haunted Paris Opera House. Emilie Kouatchou will soon make history as Christine when she begins on January 26. See it!

Tina
Simply the best! The exuberant show that tells the story of the legendary Tina Turner stars Nkeki Obi-Melekwe as the Queen of Rock. See it!

To Kill a Mockingbird
Greg Kinnear makes his Broadway debut as Atticus Finch in Harper Lee’s classic story at the Shubert Theatre. Watch playwright Aaron Sorkin and director Bartlett Sher discuss adapting the material for stage below. See it!

Wicked
Head to this Broadway blockbuster to take a look at what happened in the Land of Oz from a different angle. Brittney Johnson will make history when she takes over the role of Glinda on February 14. See it!

Please Note: Audience members must show proof of vaccination against COVID-19 to attend all Broadway shows through February 28, 2022 and wear masks during the performance. Click here for more information.