A beloved theatrical masterpiece, FIDDLER ON THE ROOF, comes to the Hobby Center this month featuring stunning movement and dance, a wonderful cast and a lavish orchestra telling the heartwarming story of fathers and daughters, husbands and wives, and the timeless traditions that define faith and family. Maite Uzal (Golde)  shares with us what it is like to play the matriarch in a show with this legacy and what you can expect when FIDDLER ON THE ROOF when it plays the Hobby Center March 24-29. 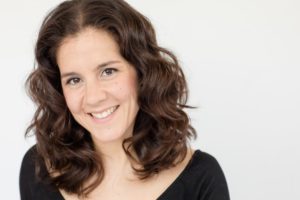 Can you tell us about how you became a member of this production and a bit about the audition process?

Of course! I saw the casting call online and submitted my materials (headshot and resume, reel). Then I was asked to submit a taped audition of “Do You Love Me?” and some scenes of the show, after that I was given some notes on the scenes and was asked to submit a second tape implementing those notes. Finally, I was called in to do an audition in person for creatives and producers (I was very, very nervous as you can imagine) and a week after that I got a call from the Company Manager to offer me the role.

FIDDLER ON THE ROOF is a nostalgic and favorite musical memory for so many people. What is it like performing in a show with this kind of legacy?

It is a privilege, a pleasure and a significant responsibility. It’s an honor to be able to deliver a story that warms the hearts of an audience every night. On the one hand, being the classic it is, you know that the material is going to land well (or that it should) because it has already stood the test of time in that regard. You know that you’re working with guaranteed first-rate material on your plate. But on the other hand, and precisely because of that reason, there is a huge responsibility to honor that material and the high expectations from people who walk into our show with a deep knowledge of the story and the characters as well as with joyous anticipation of what the narrative will, yet again, bring to them.

On the same note, since this is a show many subscribers may have seen previously, what is something new and different they might not expect from this current national tour?

I think that overall the show has a very raw and grounded feel to it that might come across as a novelty for those who are already familiar with previous Fiddlers (it will make more sense when they see the production) but most importantly, the choreography is a very specific element that has been revisited in our production. We still honor the iconic work of Jerome Robbins though, so no worries if you consider yourself a “Fiddler purist”: so are we.

You play the matriarch, Golde, in this piece who is a mother to five daughters. How did you develop your approach to playing this role and did you incorporate any experiences from your own life? We noticed you dedicate your performance to your mother!

Yes, to her and to all the mamas out there: the queens of multitasking.

As far as the development of the role goes, I tried to make sure that all the material that I researched was always filtered through OUR book and score. It’s tempting to branch out to videos, books, etc. that are related to our story or about our story and to want to make choices based on how personally appealing a secondary source might be. Sometimes you can, sometimes you shouldn’t: and that process of discerning and filtering I find extremely exciting and complicated at the same time. Also, in many cases I don’t think there’s a categorical right or wrong but a stronger choice that works best for you and not for the preconceived or “external” idea that you have of how you should or shouldn’t be playing the character. I dedicate this role to my mother because in the process of developing it I have had to turn to her to try to have a better understanding of what motherhood means. In doing that, I have discovered a woman that I was never fully aware of as a younger, more selfish woman and in some way, sadly, I have “missed”. But Golde has given me and is giving me the opportunity to realize that and to “catch up” and make up for it and now my mother and I have an even closer relationship than the one we had before me embarking upon this touring experience.

What is your favorite scene in the show (one you are in or not!) and why?

It actually varies as we go along and also, it’s very hard to pick. It’s like saying…what’s your favorite part of the ice cream pint? ALL OF IT. But, anyhow, “Tradition” and “Do You Love Me?” are always among my favorites. “Tradition” because it’s so powerful and exciting, almost epic in its literal meaning. And “Do You Love Me?” because it’s the perfect blend of tenderness and comedy that takes Golde and Tevye to discover love like their daughters before them have. As we grow up, in many ways we learn love and so many other things from our parents: they’re our role models either to imitate or to reject what they we see them do; but in “Do You Love Me?” it’s the daughters who serve as a role model to their parents to discover an aspect of their relationship that they had never explored before.

Have you ever performed in or visited Texas or Houston before? Anything you are hoping to explore while you are here?

Not Houston, but we have played in Dallas and Fort Worth. Actually, those were two very significant stops in our itinerary since they marked the end of season one and beginning of season two, respectively. That meant letting go of many dear cast mates (and characters that they made their own) to let others in that are now also loved and admired. We have also played in San Antonio and after Houston we will be playing in College Station. We are very much looking forward to visiting the NASA!