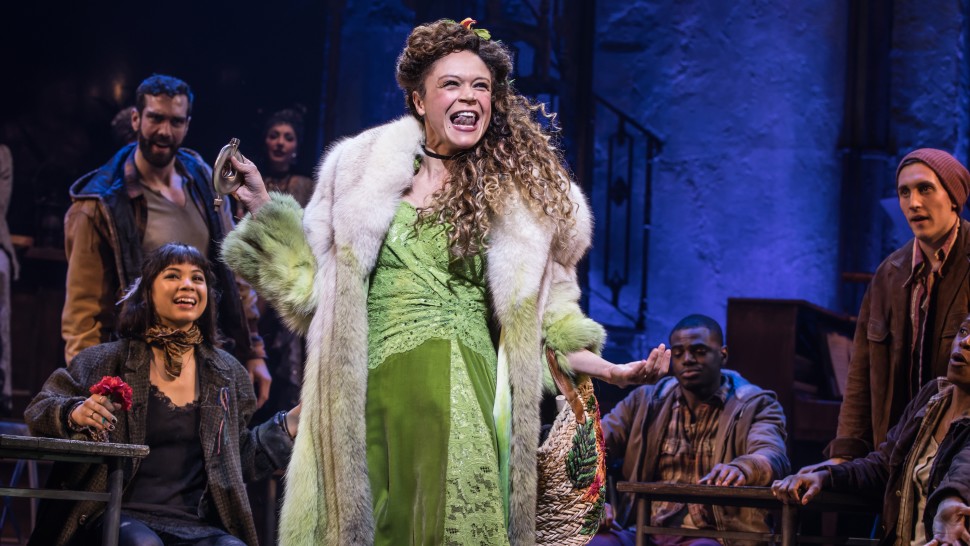 The biggest hits on Broadway are headed to Houston as part of the just-announced Memorial Hermann Broadway at the Hobby Center 2020-21 season!

Learn more about all of the exciting Broadway shows headed to Houston below:

From Lincoln Center Theater that brought you The King & I and South Pacific, comes “a sumptuous new production of the most perfect musical of all time” (Entertainment Weekly), Lerner & Loewe’s My Fair Lady. Director Bartlett Sher’s glowing production is “thrilling, glorious and better than it ever was” (The New York Times). “Every so often a revival comes along that reminds you how indispensable great theater can be” (NY1). Boasting such classic songs as “I Could Have Danced All Night,” “The Rain in Spain,” “Wouldn’t It Be Loverly” and “On the Street Where You Live,” My Fair Lady tells the story of Eliza Doolittle, a young Cockney flower seller, and Henry Higgins, a linguistics professor who is determined to transform her into his idea of a “proper lady.” But who is really being transformed?

More than 35 million people around the world have experienced the smash hit phenomenon that is Blue Man Group and now it’s your turn! It’s everything you know and love about Blue Man Group—signature drumming, colorful moments of creativity and quirky comedy—the men are still blue but the rest is all new! Featuring pulsing, original music, custom-made instruments, surprise audience interaction and hilarious absurdity, join the Blue Men in a joyful experience that unites audiences of all ages.

No matter how you say it, Tootsie is unanimously funny! It’s a laugh-out-loud love letter to the theatre, based on the Oscar-nominated film. Featuring a Tony-winning book by Robert Horn and an outrageously clever score by 2018 Tony winner David Yazbek (The Band’s Visit, Dirty Rotten Scoundrels), this New York Times Critic’s Pick is a “hilarious, thoroughly modern Tootsie” (People Magazine) that’s “even funnier than the movie!” (New York Post). “In these turbulent times, with the world out of balance, we need a place to let the good times roll,” says Rolling Stone, “Tootsie is it.”

Direct from Broadway, Mean Girls is the hilarious hit musical from an award-winning creative team, including book writer Tina Fey (30 Rock), composer Jeff Richmond (Unbreakable Kimmy Schmidt), lyricist Nell Benjamin (Legally Blonde) and director Casey Nicholaw (The Book of Mormon). Cady Heron may have grown up on an African savanna, but nothing prepared her for the vicious ways of her strange new home: suburban Illinois. Soon, this naïve newbie falls prey to a trio of lionized frenemies led by the charming but ruthless Regina George. But when Cady devises a plan to end Regina’s reign, she learns the hard way that you can’t cross a Queen Bee without getting stung. New York Magazine cheers, “Mean Girls delivers with immense energy, a wicked sense of humor and joyful inside-jokery.” USA Today says, “We’ll let you in on a little secret, because we’re such good friends: Get your tickets now!”

Beautiful: The Carole King Musical tells the inspiring true story of King’s remarkable rise to stardom, from being part of a hit songwriting team with her husband Gerry Goffin, to her relationship with fellow writers and best friends Cynthia Weil and Barry Mann, to becoming one of the most successful solo acts in popular music history. Along the way, she made more than beautiful music, she wrote the soundtrack to a generation. From the string of pop classics King wrote for the biggest acts in music, to her own life-changing, chart-busting success with her 1971 album Tapestry, Beautiful takes you back to where it all began—and takes you on the ride of a lifetime. Featuring over two dozen pop classics, including “You’ve Got a Friend,” “One Fine Day,” “Up on the Roof,” “You’ve Lost That Lovin’ Feeling,” “Will You Love Me Tomorrow,” and Natural Woman,” this crowd-pleasing international phenomenon is filled with the songs you remember—and the story you’ll never forget.

An album that inspired a revolution. A revelation that changed the world. A reinvention for this millennium. Jesus Christ Superstar is an iconic musical phenomenon with a world-wide fan base. In celebration of its 50th anniversary, a new mesmerizing production comes to North America. Originally staged by London’s Regent’s Park Open Air Theatre and helmed by acclaimed director Timothy Sheader (Crazy for You, Into the Woods) and award-winning choreographer Drew McOnie (King Kong, Strictly Ballroom), this production won the 2017 Olivier Award for Best Musical Revival garnering unprecedented reviews and accolades. Appealing to both theater audiences and concert music fans, this production pays tribute to the historic 1971 Billboard Album of the Year while creating a modern, theatrical world that is uniquely fresh and inspiring.

Come see how the world could be. Welcome to Hadestown, where a song can change your fate. Winner of eight 2019 Tony Awards, this acclaimed new musical by celebrated singer-songwriter Anaïs Mitchell and innovative director Rachel Chavkin (Natasha, Pierre & The Great Comet of 1812) is a love story for today…and always. Hadestown intertwines two mythic tales—that of young dreamers Orpheus and Eurydice, and that of King Hades and his wife Persephone—as it invites you on a hell-raising journey to the underworld and back. Mitchell’s beguiling melodies and Chavkin’s poetic imagination pit industry against nature, doubt against faith, and fear against love. Performed by a vibrant ensemble of actors, dancers and singers, Hadestown is a haunting and hopeful theatrical experience that grabs you and never lets go.

So much happened before Dorothy dropped in. Wicked, the Broadway sensation, looks at what happened in the Land of Oz…but from a different angle. Long before Dorothy arrives, there is another young woman, born with emerald-green skin—smart, fiery, misunderstood, and possessing an extraordinary talent. When she meets a bubbly blonde who is exceptionally popular, their initial rivalry turns into the unlikeliest of friendships…until the world decides to call one “good,” and the other one “wicked.” From the first electrifying note to the final breathtaking moment, Wicked—the untold true story of the Witches of Oz—transfixes audiences with its wildly inventive story that USA Today cheers is “a complete triumph! An original musical that will make you laugh, cry, and think.”

Frozen, the Tony-nominated Best Musical is melting hearts on Broadway and across the country in an all-new production created for the stage by an award-winning team. Heralded by The New Yorker as “thrilling” and “genuinely moving,” Frozen features the songs you know and love from the original Oscar-winning film, plus an expanded score with a dozen new numbers by the film’s songwriters, Oscar winner Kristen Anderson-Lopez and EGOT winner Robert Lopez.  Joining them on a creative team that has won a cumulative 16 Tony Awards are Oscar winner Jennifer Lee (book), Tony and Olivier Award winner Michael Grandage (director), and Tony winner Rob Ashford (choreographer). An unforgettable theatrical experience filled with sensational special effects, stunning sets and costumes, and powerhouse performances, Frozen is everything you want in a musical: It’s moving. It’s spectacular. And above all, it’s pure Broadway joy.

For more information about the series and the benefits of being a subscriber, click here.