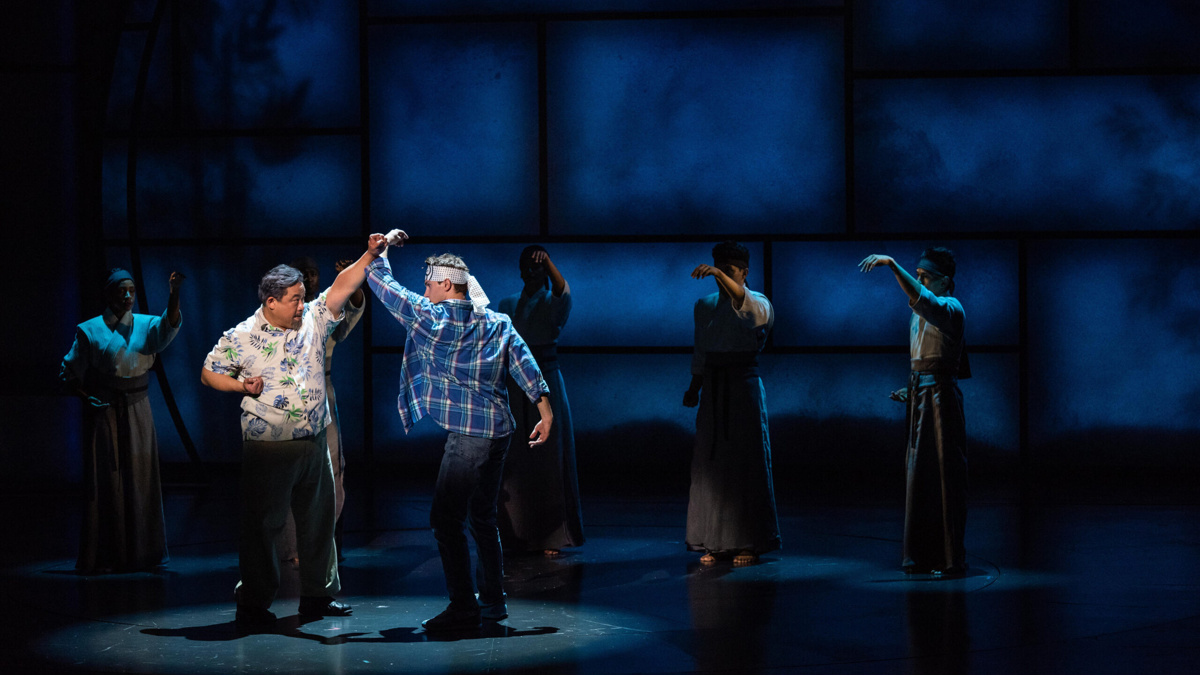 It’s been over 35 years since audiences first met Mr. Miyagi, Daniel LaRusso and more at the Cobra Kai Dojo in the 1984 movie The Karate Kid. The film was the fourth highest-grossing film of that year and is cemented in pop culture history as one of the most beloved films. With four sequel films and a successful television spin-off, there are few thing that haven’t been touched by The Karate Kid. Now, the movie is getting the stage treatment thanks to the world premiere production of The Karate Kid – The Musical. Playing at Stages St. Louis through June 28, The Karate Kid – The Musical  features a book by The Karate Kid screenwriter Robert Mark Kamen and music and lyrics by Drew Gasparini. Renowned Japanese director Amon Miyamoto helms the production. In a new episode of The Broadway Show with Tamsen Fadal, go behind the scenes with the cast and creative team of the new show.

The Broadway-aimed musical features Jovanni Sy as Mr. Miyagi, John Cardoza as Daniel LaRusso, Kate Baldwin as Lucille LaRusso, Alan H. Green as John Kreese, Jake Bentley Young as Johnny Lawrence, Jetta Juriansz as Ali Mills and Luis Pablo Garcia as Freddie Fernandez. “I saw [The Karate Kid] when I was 16 years old in the movie theater, and it was a profound experience,” Sy said. “Two or three weeks before I saw it, I had seen 16 Candles, which has Long Duk Dong and that was my experience of seeing myself on camera my whole life. Characters like Long Duk Dong, objects of ridicule, and now here’s this movie, The Karate Kid with Pat Morita as an iconic character Mr. Miyagi, who has dignity and humor and dimension. It really had a profound effect on me.”

Making sure the score was genuine was a top priority for composer Gasparini. “We are doing something that has not been seen before, especially in regard to a movie adaptation on Broadway,” he said.” This looks different. This feels different. This sounds different. They flew me to Okinawa to study with musicians out there just to get the authenticity correct. No matter what, even if you’re skeptical, just go and I promise you will have a good time and be entertained.”

For producer Kumiko Yoshi, it was a deal-breaker to have the movie’s original screenwriter write the book for the musical. “I never thought of it this way and I resisted it,” screenwritr Kamen said. “Our producer would not give up, and she pursued me until she got to sit down and talk to me about it. Sort of hesitantly, I said, ‘OK, I don’t see it’ because I’m not a musical theater person. Little by little, I got sucked into the process and what I found was that these characters I created 40 years ago could be given a deeper, richer, more resonant voice with music and song.”

Watch the video below, and head here to check your local listings for The Broadway Show. Hosted by Emmy-winning anchor Tamsen Fadal, it is the only nationally syndicated weekly theater news program.