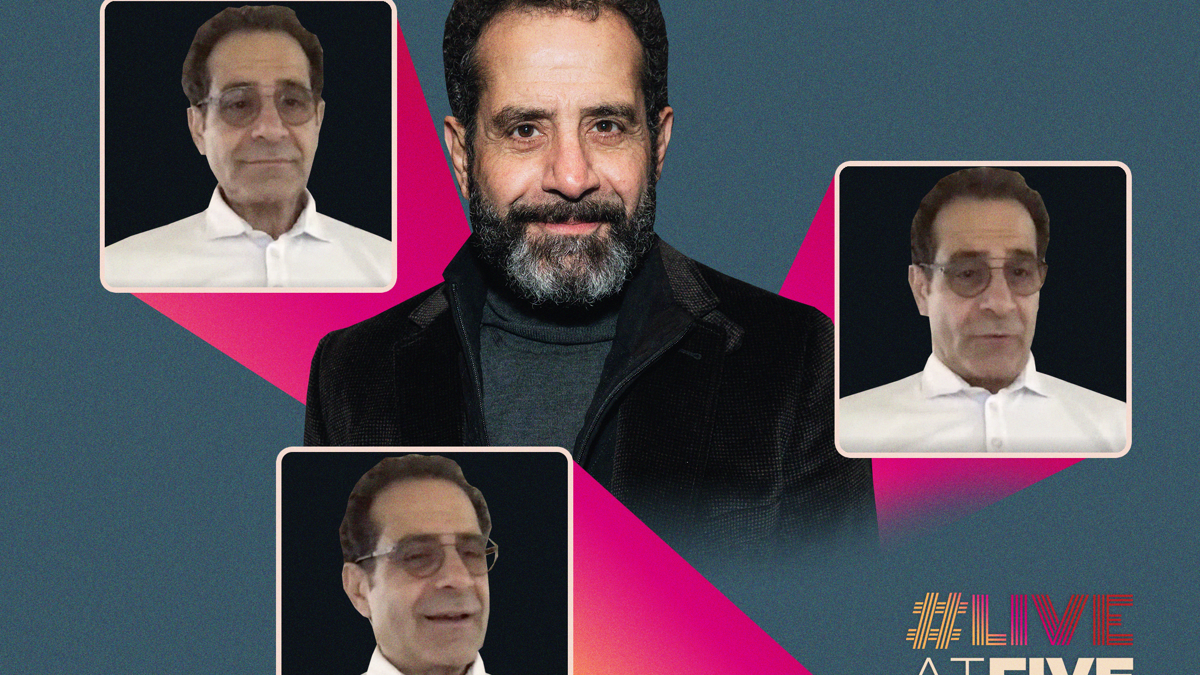 It’s been six years since Tony Shalhoub starred in James Lapine’s Act One at Lincoln Center Theater and earned his third Tony nomination. Now, fans will get another chance to experience the play based on Moss Hart’s memoir beginning on June 19 at 8PM ET. That’s when Act One will be available to watch for free on Lincoln Center’s YouTube channel, Facebook page, and on Lincoln Center at Home through July 3 at 8PM. Shalhoub appeared on Broadway.com’s #LiveatFive: Home Edition to talk about the show’s new life and more.

Act One tells the story of legendary writer/director Moss Hart and featured Shalhoub and Tony winner Santino Fontana as Hart at different stages of his life, along with and Tony winner Andrea Martin as a pivotal figure in Hart’s early life. Shalhoub is excited for a new group of theater fans to discover the Tony-nominated work. “I really hope that [the broadcast] reintroduces people to this book,” Shalhoub said to Broadway.com’s Paul Wontorek. “This is the kind of material that even if you have read it at one stage of your life, it’s worth revisiting because it’s timeless in a way. You see more things in it the more you read it. It has something for everyone, whether you’re in theater or not. It’s kind of a perfect American story and is just a beautiful piece of work.”

Prior to Act One, Shalhoub earned Tony nominations for his featured roles in the plays Golden Boy and Conversations with My Father. It wasn’t until his first Broadway musical, 2018’s The Band’s Visit, that Shalhoub took home a Tony Award. “It was surreal because I had never really done musicals before,” he said. “To just be in a musical, and then to be nominated in a musical, was confounding. In my acceptance speech I wanted to say, ‘I don’t know why I wasted all those years doing plays when what you always really wanted was a Tony Shalhoub musical.’ It was surreal and so gratifying.”

The Band’s Visit took home 10 Tony Awards that night, including a trophy for Shalhoub’s co-star Katrina Lenk who is leading the Company revival as Bobbie. “People are going be seeing a lot of her for many, many years,” Shalhoub said. “Her talent and her versatility is just boundless. The worst part of working with her and knowing her is that just she’s a lovely, lovely person and it just makes it more irritating.”

The Tony-winning duo got to work together again post-The Band’s Visit when Lenk appeared on The Marvelous Mrs. Maisel, for which Shalhoub won an Emmy Award. The series is currently on hiatus due to the COVID-19 pandemic, but Shalhoub is hoping for a cast reunion sooner rather than later. “To be away from it for so long is a little maddening,” he said. “We’re a very close-knit group. We’re very anxious to get back to doing it. I would stay with [Mrs. Maisel] as long as they could keep going. I love it. I’m not sure how many seasons they have in mind, but I could keep it going.”

Hear Shalhoub talk about auditioning for Neil Simon and more in the full episode below!