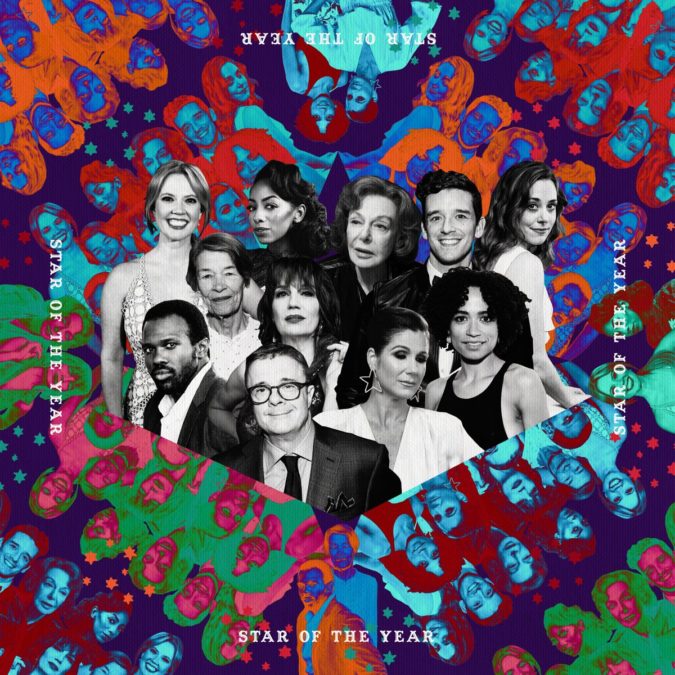 Who Will Be the 2018 Broadway.com Star of the Year? Vote Now!

The halls are decked, the Christmas cookies are frosted (and let’s be honest—taste-tested!) and “best of the year” props are being handed out left and right. Well now it's your turn to have a say! Select Broadway.com’s 2018 Star of the Year—from Tony-winning trailblazers to thrilling new faces, we've choosen 11 nominees that epitomized what it means to be a Broadway star, both onstage and off. Now it's up to you to pick the winner by voting by Thursday, December 13 at 11:59PM. Choose wisely!

Stephanie J. Block
Two-time Tony nominee Stephanie J. Block is making audiences believe in life after love at the Neil Simon Theatre and living up to her character: "Star." Dressed to kill in skin-tight sequins and feathers, Block is strutting her stuff as the four-letter diva in The Cher Show. Not only is she delivering a powerhouse performance as one of the three Chers; in taking on this role, SJB is truly flaunting her inner and outer beauty both on and off stage. Bonus points for, just like her alter ego, speaking up and having her say on Twitter in the best way!

Erika Henningsen
Erika Henningsen is starring in one of the "groolest" musicals on the Great White Way. But unlike delightfully evil queen bee Regina George, this young talent is all about welcoming others inside the inner circle, specifically Broadway.com viewers. Henningsen has given Mean Girls fans a warm welcome backstage with her super fun vlog Too Grool for School, a perfect companion to her heartfelt performance in the show. Not only an onstage inspiration, she also encouraged fans to hit the voting polls and give homes to adorable foster dogs!

Joshua Henry
Broadway triple threat Joshua Henry became a three-time Tony nominee and a Grammy nominee for his groundbreaking performance as Billy Bigelow in Carousel. Not only was his "Soliliquy" one of the standout performance moments of the theatrical season; he took on a coveted, classic musical theater role traditionally played by white male leads, showcasing how Broadway continues to break down barriers in the entertainment world. Beyond Broadway, he also took on the greatest role of his career—becoming a father offstage.

Glenda Jackson
Glenda Jackson returned to the Broadway stage for the first time in 30 years in 2018 (she was a little busy serving as a Member of Parliament and taking the London stage by storm), and what a return it was. The Academy Award winner garnered her first Tony Award for Three Tall Women, declaring, "I'm one of the oldest people, I think, ever to have stood on this platform receiving this award." The towering talent is not done with Broadway yet—Jackson will grace the Great White Way in 2019 as King Lear.

Nathan Lane
Broadway legend Nathan Lane became a three-time Tony winner in 2018, demonstrating brilliant versatility as a performer playing hard-edged real-life lawyer and Donald Trump mentor Roy Cohn in the Tony-winning revival of Angels in America. His emotional Tony acceptance speech made us tear up, saying, "This award is a lovely vote of confidence that I've been on the right path." He also made us laugh in 2018 with stories of his sassy pup Mabel and his perfect coming out quip. A true man of the theater, he will return to Broadway in 2019 in Gary.

Beth Leavel
Tony winner Beth Leavel is a self-proclaimed worker bee, and the fruits of her labor were fully realized in 2018. After a summer turn as Mama Rose, she stepped into her "evil twin" role as Dee Dee Allen in the hilarious musical The Prom, reuniting with Drowsy Chaperone creators Casey Nicholaw and Bob Martin. Audiences that catch Leavel's outrageous performance can clearly see that wonderful things happen when they work together. A powerhouse wherever she goes, she also belted her face off and rocked a gold jumpsuit…in the freezing cold.

Elaine May
Screenwriter, film director, actress and comedy queen Elaine May returned to the Great White Way for the first time in over 50 years to star in Kenneth Longergan's heart-wrenching memory play The Waverly Gallery. Though she's a known expert at making audiences laugh, she wins and breaks hearts in the show as Gladys Green, a feisty, chatty grandmother suffering from Alzheimer's disease. Though audience members best have the tissues ready for this play and her performance in it, it seems May has maintained her brilliant sense of humor off-stage.

Patti Murin
In 2018, Patti Murin rose to the challenge of bringing the iconic character of Anna to spectacular life in Disney's Frozen on Broadway. In doing so, she has redefined the Disney princess on and offstage. Despite her handsome husband Colin Donnell, their perfect pets and a dream job, Murin has been exceptionally candid this year about the parts of her life that are less than ideal, speaking out about mental health and sexual assault. Starring in a big Broadway hit and using her platform to help others? Sounds like a star to us.

Christiani Pitts
After making her Broadway debut in A Bronx Tale, Christiani Pitts took center stage in 2018, turning out a stunning leading lady performance in Broadway's mammoth musical King Kong. It's difficult not to take one's eyes off of her when she's onstge—even when she's standing next to a 2,000 pound monkey. She has been determined to make classic silver screen character Ann Darrow the empowered heroine today’s audiences need, shattering "damsel in distress" stereotypes both onstage and off.

Lauren Ridloff
It's impressive enough that Lauren Ridloff made the leap from Kenny Leon's ASL teacher with no professional stage experience to the star of the acclaimed director's revival of Children of a Lesser God. Nabbing a Tony nomination for her stunning debut was truly remarkable (as was her fierce fashion on Tony night). Though she didn't take home the trophy, Ridloff's story is beyond inspiring. Also—have you ever experienced better on stage chemistry/offstage BFF goals than she had with co-star Joshua Jackson? Seeing them together was always a treat!

Michael Urie
Michael Urie is making Harvey Fierstein's Tony-winning role in Torch Song his own on the Great White Way. Always ready for the next challenge, Urie will take his incredible performance on the road in a national tour after the Broadway run ends. Seems like this stage and screen star knows how to keep busy; he spent his "break" between Torch Song off-Broadway and Torch Song on Broadway playing Hamlet. This is not to say that Urie is all work and no play. Kudos to him for making the Patti LuPone cell phone snatch story even funnier.